Call me back
Ask a question

Provided by the National Pension Helpline 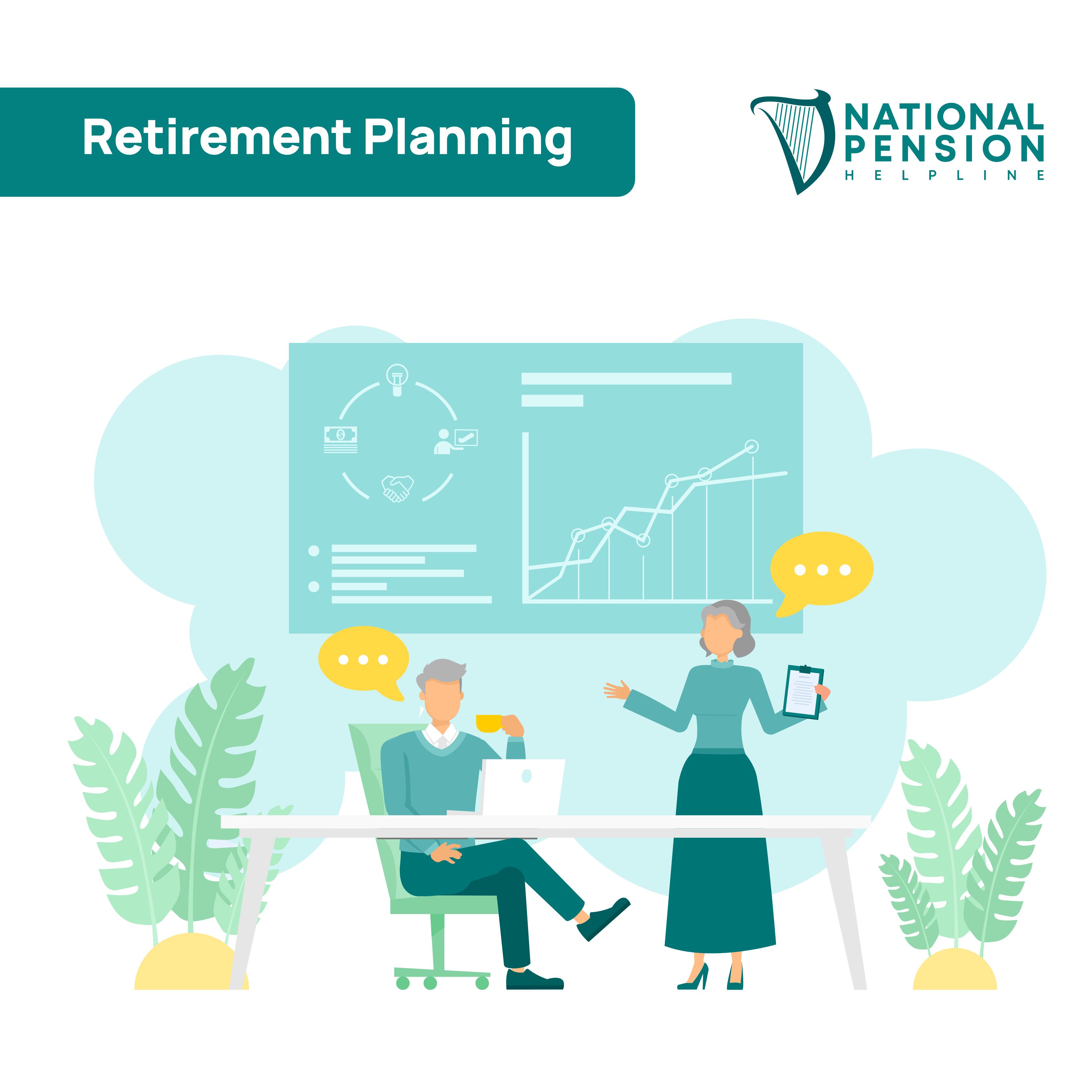 When it comes to taking control of your finances there are a lot of new terms and phrases that you may not have come across before.

Pensions are complicated but we are here to make them simple.

In this page we are going to outline some terms that might be many people have never come across before and help make them understandable.

An Annuity is a simplified pension arrangement that guarantees you a set monthly payment in retirement.

It is essentially a contract between you and an insurance company over a long period of time that manages your contributions to a fund that ultimately pays out a monthly retirement payment. It is often an alternative to an ARF.

An Approved Retirement Fund (ARF) is a post-retirement financial product that offers the opportunity to reinvest your pension value after retirement and after you draw down the initial tax-free lump sum.

Auto enrolment is a system of automatic pension enrolment that is co-funded by employers and the state.

In order to encourage people to take up membership of the scheme, the Irish system will operate an opt-out approach rather than an opt-in system.

What this means is that everyone who meets the income threshold to take part in the scheme who doesn’t already have a private pension membership will automatically be enrolled in it through their company’s payroll.

They have the option to opt-out if they feel they cannot afford it but can also return to it at a later stage if their income improves.

People who choose to remain in the system will have their pension savings matched on a one-for-one basis by the employer.

The correct term for inheritance tax is Capital Acquisitions Tax (CAT) and in Ireland this tax is set at 33%. It is a tax on gifts and inheritance.

If you inherit a property, for example, you will not have to pay tax on the full value of that property. You will only be taxed on the amount of the property’s value that is over the €335,000 threshold.

CGT is 33% of the total profitable amount from the sale of the asset.

A Defined Benefit pension scheme is set up by an employer to benefit an employee and represents a fixed payment each year that an employee will receive once they retire – their payment is defined.

These types of pensions are also known as occupational pension schemes and the amount of pension an employee receives in their pension pot is based on the amount of years they have been in employment and the salary that they received during this period.

A Defined Contribution (DC) pension scheme is one of the most commonly used pension arrangements.

These do not have to be equal amounts. Often an employer will make a larger percentage payment as an incentive to the employee to remain with the company.

However, the employer contribution is entirely based on the arrangements with each individual company.

The employer does not have to match the employee contribution for a DC pension scheme to be a valid DC scheme. It is simply common for the employer to do so.

An Enhanced Transfer Value is an offer made by a company to “buy out” the members of their Defined Benefit (DB) pension scheme. Typically an enhanced transfer value is 20-30 times your annual retirement package.

The Enhanced Transfer Value is a once-off offer from your previous employer. It’s designed to give you enhanced benefits in the form of the value of your existing pension plus additional benefits to protect and grow your pension in the future.

It is usually a very advantageous offer which will generally benefit the member financially if they choose to avail of it.

It can be particularly beneficial to deferred members. Deferred members of defined benefit schemes are those who have left the scheme early due to changing jobs, for example, but are still entitled to a benefit from the scheme when it matures at retirement age.

Very often, deferred members will have another pension scheme in place with their new employer, and so, transferring an older DB pension to a new pension arrangement can be very attractive.

It incentivises workers to continue working after the retirement age of 66. Every year a worker chooses to remain in the workforce they will receive a larger state pension.

Workers who choose to work until 70 will receive an extra 24% in state pension then those who retired at 66.

The Master trust structure was created to benefit companies that do not want to manage their own board of trustees.

Previously, each company that offered a defined contribution pension would have to appoint and manage their own board of trustees from within the company. Operating as a trustee can be a time-consuming and complex role and the management of its operations would fall to senior management and the HR department.

A Master Trust is an alternative to this scenario, offering the services of professional trustees to manage a company’s pension provision.

While the experience for the employee will appear to be the same, the bulk of the pension management will be undertaken by the professional trustees.

At the same time they will manage a number of different companies under the same scheme.

A pension contribution is a payment that is made into a pension fund by an employee and normally taken at source from their salary or wage.

Each salary period a percentage of your salary is invested in a pension fund which accumulates over the years of your working life to result in a sum of money that will pay you a pension each month in retirement.

The value of each contribution and the way in which it is invested will add up to whether you have a strong enough pension plan.

Pension contributions are supported by the government, meaning that they are subject to tax relief. This tax relief differs depending on your rate of income tax.

A pension review is a process whereby you work with a qualified pension advisor to examine your current pension plan and set out to fully understand its parameters.

The goal is to determine whether it offers the best value available to you, the amounts you can expect at retirement, the rules governing payment and when you can expect to avail of its value.

There are many other aspects too that can be included, including identifying alternative pension opportunities that could replace or supplement your existing pension.

Taking a starting point that all funds can go up as well as down, the review is an opportunity for you to examine how your fund has performed over the past few years.

Pension tracing is the process of tracking down pension payments that you may have made in jobs throughout your life and may have lost track of.

The value of any payments made remains – they are valuable and worth tracing. The process can be complicated but there is expert help available through a pension advisory service.

A Pension Transfer refers to the process of moving your pension fund from your current financial provider to a new one.

You may choose to move from a Defined Benefit to a Defined Contribution or from either of these to a Personal Pension or a Pension Retirement Savings account.

This move might be prompted by a career move to a new company, the closure of an existing pension scheme or an attempt to reconcile a number of pensions throughout your career.

A Personal Retirement Bond is a policy that is set up by the trustees of a company pension scheme to allow a member to leave the scheme and take the value of their pension fund with them.

It is an essential pension vehicle when releasing a member from the fund because they have chosen to move to a different job or stopped working with the company that administers the pension fund for another reason.

A PRSA is a pension product offered by financial institutions such as insurance companies or banks that is designed to allow individuals to take on a long-term personal pension plan that is not tied to any one employer.

It is a contract between the individual and the pension plan provider. It can be considered similar to an investment plan that allows you to save in a flexible way.

Anyone can open a PRSA but it is most often used by people who are not part of a company pension scheme.

You can change employment and it will not affect your plan as it is personal to you and not a specific employer.

Often, people with a company plan take out a PRSA as an additional pension product to ensure that they have adequate means to support their cost of living in retirement.

A PRSA is designed to be personal to you and exclusive of your employer but it is possible for your employer to make payments to your PRSA if it chooses to do so.

Contact a pension advisor for more help on this area of your pension planning.

Often referred to as a company pension plan, a superannuation fund is a pension program designed to benefit employees in an organisation after retirement.

It can also be described as a defined-benefit or defined-contribution plan. In essence, superannuation is designed to ease the complexity of forming a retirement plan.

Funds for a superannuation plan are deducted from an employee’s wages/salary over a number of years.

It is often desirable for employees who value a predictable pension plan because of the calculable variables that influence its worth, such as:

When they do retire, the eligible recipient of a superannuation fund will be given a fixed amount, likely on a fortnightly basis.

Retirement Annuity Contracts (RACs), like PRSAs (above) are also personal pension plans that you manage yourself and are sold by banks and insurance companies.

They are generally not your employer but people within the company or associated with it who have knowledge of the pension landscape who take on this role.

They are expected to work impartially and by the rules and governance of the scheme.

Take Your Assessment
Request A Callback

Simply fill in the assessment form and a member of our team will be in touch to discuss your options. This is a 100% cost and commitment free service.

© Copyright 2021. NationalPensionHelpline.ie is an information-only website and does not provide direct financial advice. By submitting your information through the platform, your information is sent directly to our pension advisor partners who are regulated by the Central Bank of Ireland. NationalPensionHelpline.ie has a registered office at National Pension Helpline, 151 Thomas Street, Dublin 8, D08 PY5E. View privacy policy.

You can find out more about which cookies we are using or switch them off in settings.

This website uses cookies so that we can provide you with the best user experience possible. Cookie information is stored in your browser and performs functions such as recognising you when you return to our website and helping our team to understand which sections of the website you find most interesting and useful.

Strictly Necessary Cookie should be enabled at all times so that we can save your preferences for cookie settings.

If you disable this cookie, we will not be able to save your preferences. This means that every time you visit this website you will need to enable or disable cookies again.